The Voice of a Welfare Child

I don't normally write serious posts. I don't usually touch on incendiary topics or anything that might be considered political. But I am now.

Why now? Well, I have been seeing a lot of welfare bashing going across the interwebs.
Like that people on welfare are:
Lazy
Stupid
Moochers
Good for nothings
Living off the hard workers of society

So now it’s OK to bully those in need? Do the people who say these things even have a clue of what it’s like to live in need? To be desperate? 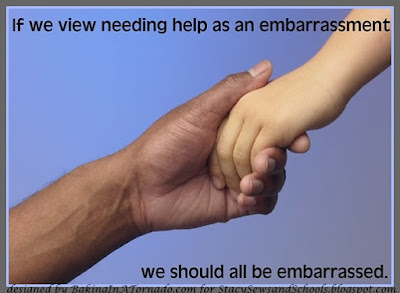 Here’s the truth as I know it.

Because yes, I've lived it. I was a welfare child.

Let’s start with getting on welfare to start with. You have to meet all kinds of requirements. If you don't have a job, you have to be actively seeking one unless you are disabled or in school full time.

Most people on welfare are single parent families. They have children and/or the elderly. They are the disabled.

They are NOT single, able bodied people.

They can NOT buy anything with food stamps other than food.

They can NOT use food stamps to buy toiletries, diapers, etc.

See, that's the thing about welfare. Most people on it have NO OTHER CHOICE. They are not sitting around in the lap of luxury. They are just barely scraping by. BARELY.

People wonder why there are so many homeless. Well, because it is NOT easy to actually get welfare. And after a certain amount of time with no job you get booted off.

There is no further safety net for people on welfare.

This is not a secret, there are all kinds of statistics that show these things, but people really don't want to listen for some reason. I don't get it.

When people talk about getting rid of welfare all I can think about is what would have happened to me as a kid? To my family?  What would happen to ALL those kids, the disabled, the elderly that rely on it so much? Those who, at a specific time of their life honestly and truly just need help?

So, here's what it's like for a child on welfare:

You don’t eat lunch after a certain grade because everyone knows who has free lunch and who doesn’t. It’s hard enough being in middle and high school without adding any extra stigmas to yourself.

You don’t get to participate in extracurricular activities. They cost too much and odds are your family may not have a car. Or they have a car but not enough money for gas.

Going to the library to do research for school was difficult. Mom didn't have a car and there was no public transportation in my small town.

Birthdays and Christmas can be very lean. I was lucky in that I had wonderful grandparents. But even then I can remember one particular birthday where the only thing I received was a pair of flip flops from Family Dollar. I’m not complaining. I know that I had it easier than most kids on welfare.

I was born in 1974 so when I was on welfare they still had the booklet of stamps. EVERYONE in the store knew what they were and what they were for. It was very embarrassing.

I didn’t have a VCR.

I sometimes had very basic cable and sometimes a phone.

I can remember one year, I was given a voucher for school clothes. I was so proud of those clothes! I was so very careful with them.

Too bad there wasn’t also a voucher for school supplies.

This was how I lived my life, this was my reality.

I can remember right before I turned 18 my mom had been robbed and then went right into the hospital. Mom had a mental illness. In fact, she didn’t even realize she was robbed until sometime after the fact.

There was no money, no food stamps and I was getting disconnect notices on the bills.
I remember my friend’s wonderful mom bringing me over a box of food.

I had to make decisions. Tough ones. Could I go to my grandmother and ask for money? I just couldn’t. My grandmother’s health wasn’t great, I was always afraid of upsetting her.
And I knew I’d have to suffer the humiliation of going to her: my extended family would look even further down on me than they already did.

So I started calling the utility companies. Thankfully they all gave extensions and I let my mom deal with it all when she got out of the hospital.

I was so stressed and so scared.

What were you doing when you were about to turn 18?

Are there people who abuse the system? Yes, there are. But the vast majority do not. The actual amount of welfare fraud is extremely low because of all the documentation you are forced to present and hoops that you have to jump through. Not just to get on, but on a regular basis in order to stay on.

But you know what? Even if the statistics on fraud were higher, I would still be all for it.

I would MUCH rather my tax dollars go to feeding people than a bridge to nowhere, another war, another vacation for the fat cats who are trying to get rid of welfare.

And because I believe in children. I believe that when a family is in need you do not kick them when they’re down. You help them back up.