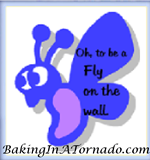 Welcome to a Fly on the Wall group post. Today 15 bloggers are inviting you to catch a glimpse of what you’d see if you were a fly on the wall in our homes. Come on in and buzz around my house.

The Sadder But Wiser Girl

Oh, my... It has been an extremely long month here at our house.

Let's start with the day of the last Fly post.

While many of you were reading Fly posts we were here - 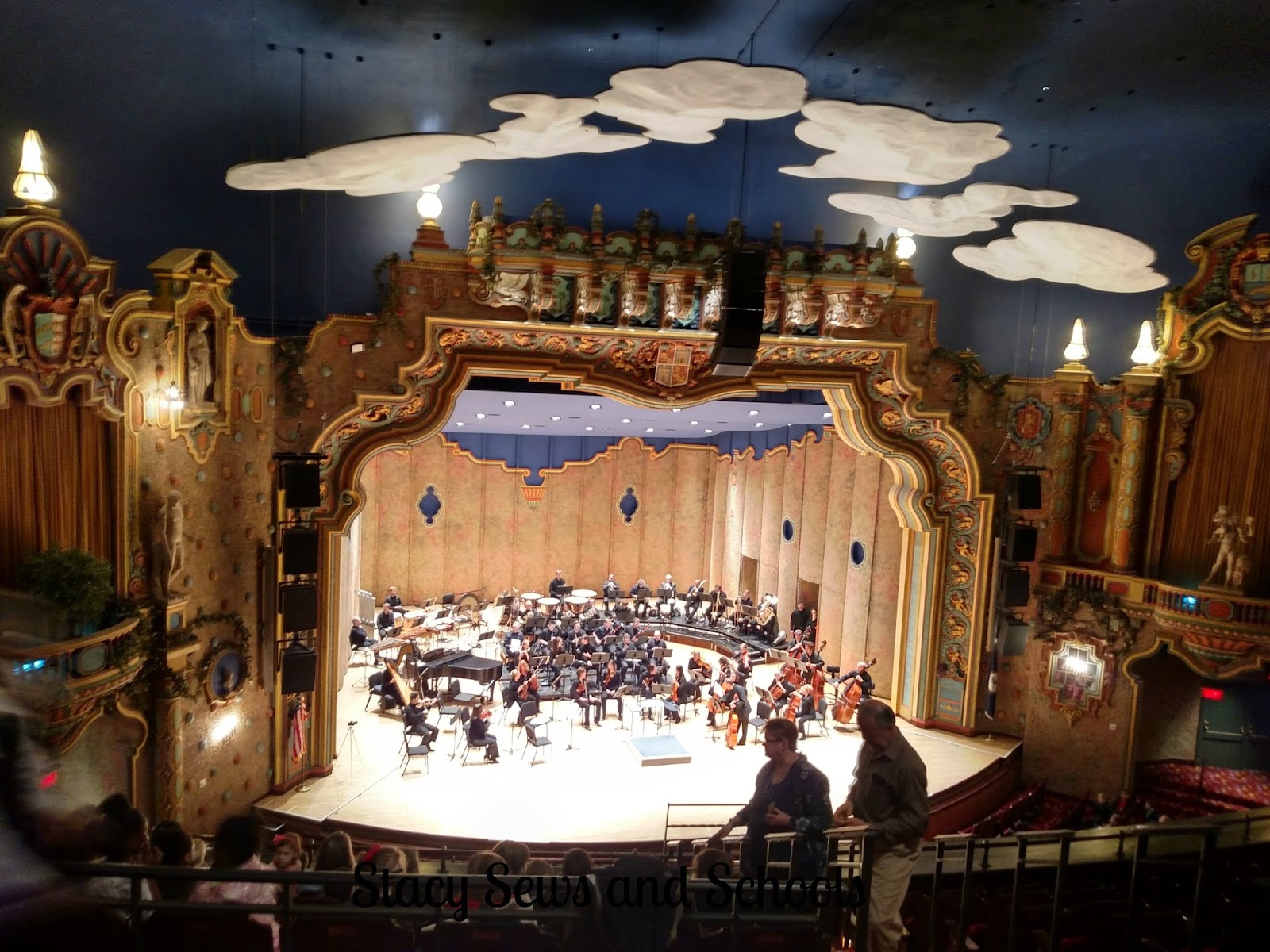 We went to the symphony. Oh, it was just AWESOME!!! The building itself was gorgeous!!
The music just might have moved me to tears. It had been soooo long since I had heard live orchestra music!!!
Cailey, Colin, Deanna and I just LOVED it. We are trying to talk The Hubby into getting us tickets for the Looney Tunes performance!! :)

The next day was Cailey's birthday party. 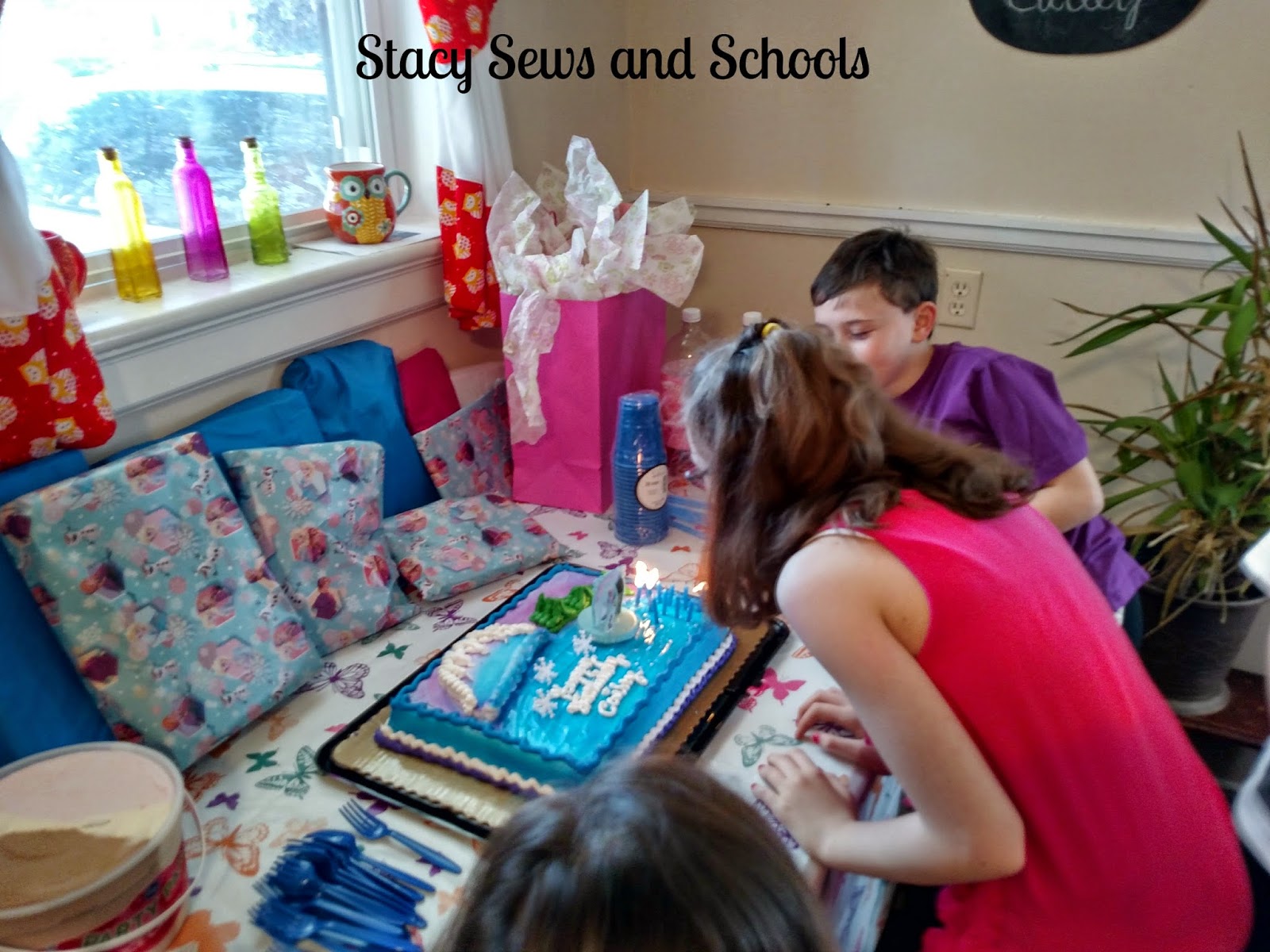 We had a few friends over for cake, ice cream and FUN!!!!!

Later on that day, The Hubby brought Cailey and Colin surprise birthday gifts. 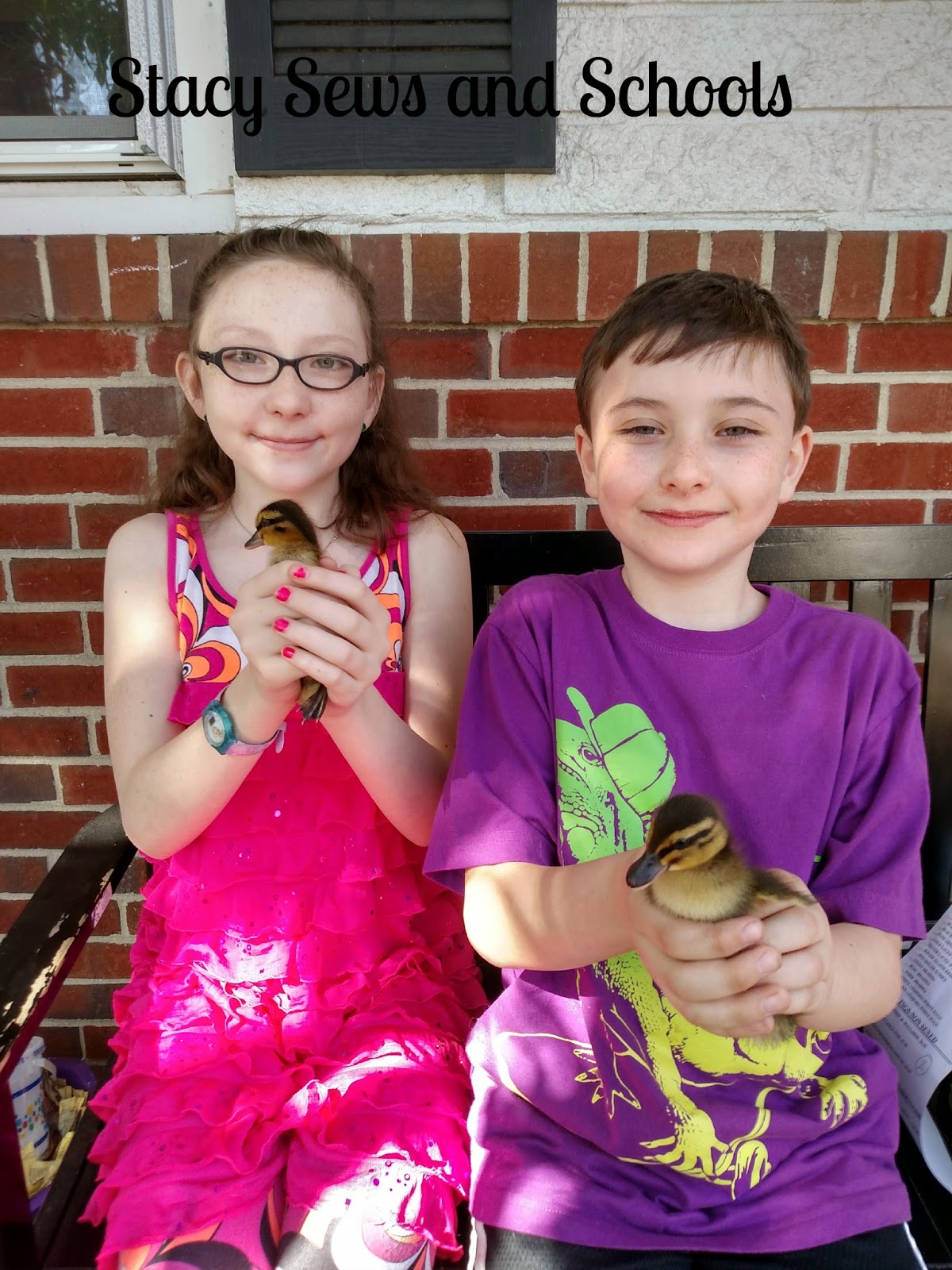 DUCKS!!!!!!!
Cailey's thinks that Cailey is its mommy. It follows her all over the place. SO CUTE! They aren't very little now but still very cute. ;)

The NEXT day was free museum day!!! (Well, the day of Cailey's party was, too, but we were too busy.) So, we hit two local museums. 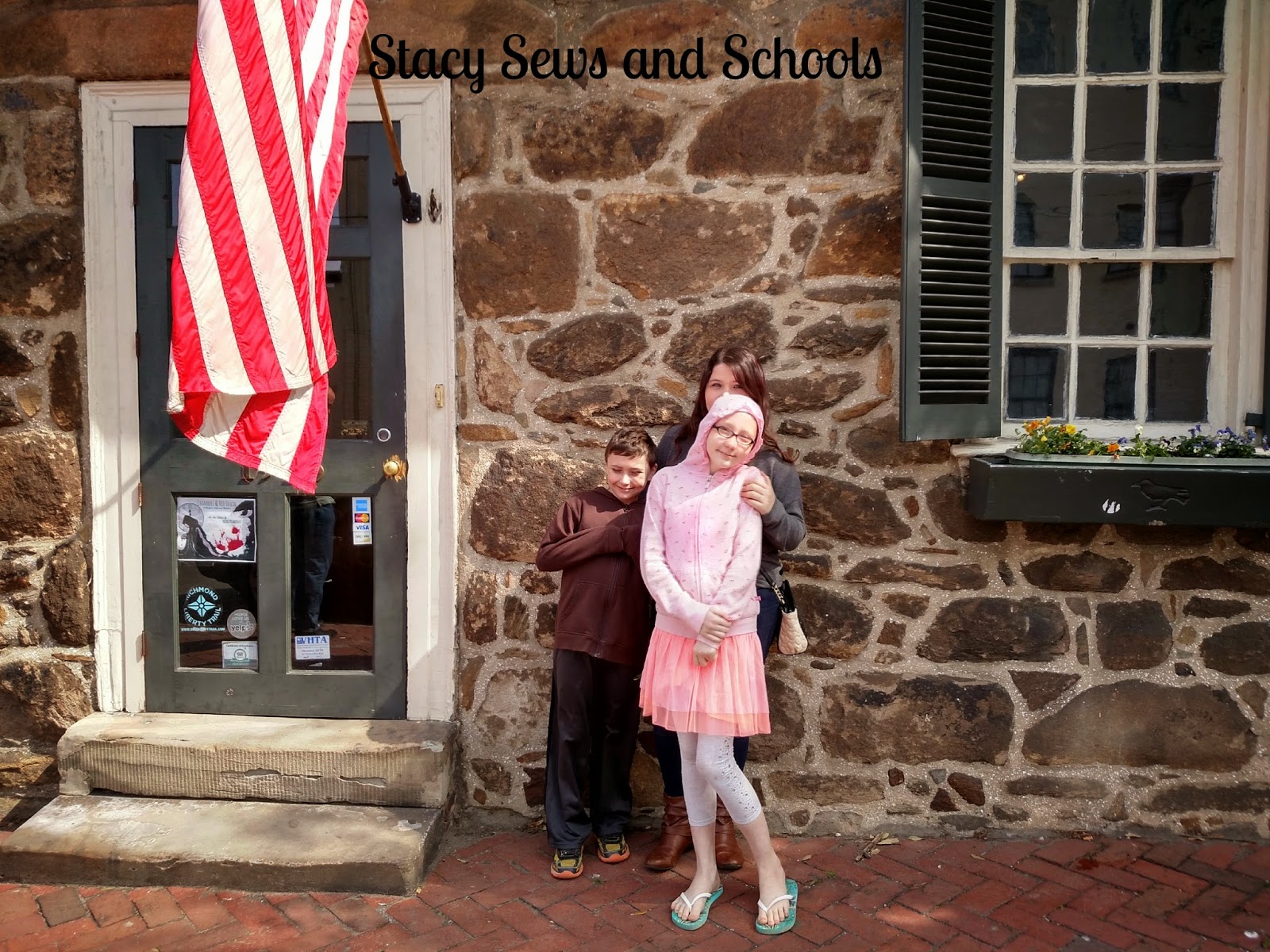 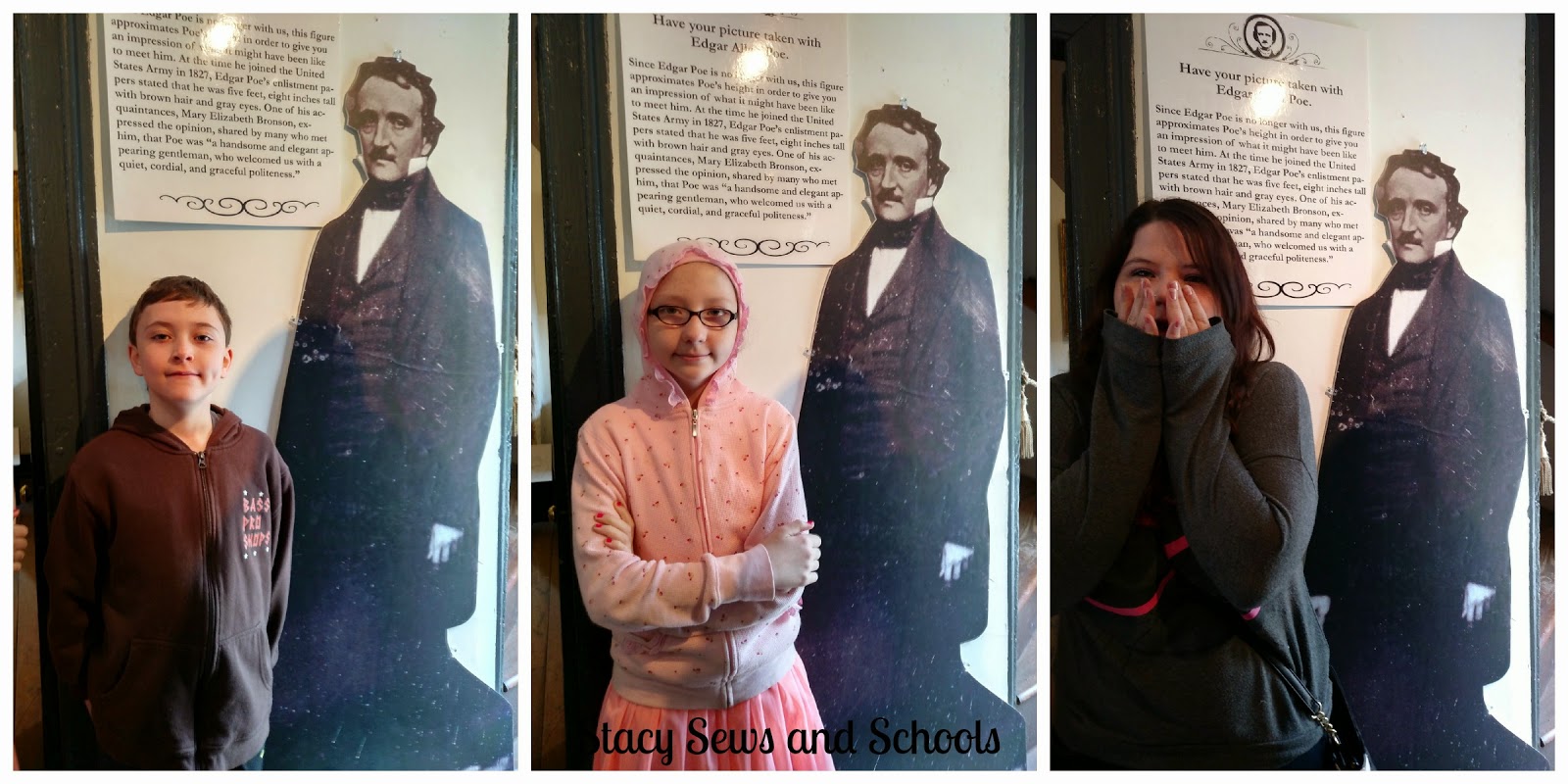 Our first stop was the Poe Museum. Deanna was in heaven!!!!
It was so cool even Cailey and Colin enjoyed it.
Unfortunately, we weren't allowed to take pics of the actual displays.
It is housed in 4 different buildings, one of which is the oldest house in the city! How cool!!!!
The gardens were beautiful, too.
They even had a scavenger hunt for skeleton parts set up for the kids! LOL
We all succumbed to the gift shop. ;) Colin got a raven finger puppet, Cailey a quill, Deanna a stuffed Poe, and me a funeral fan. 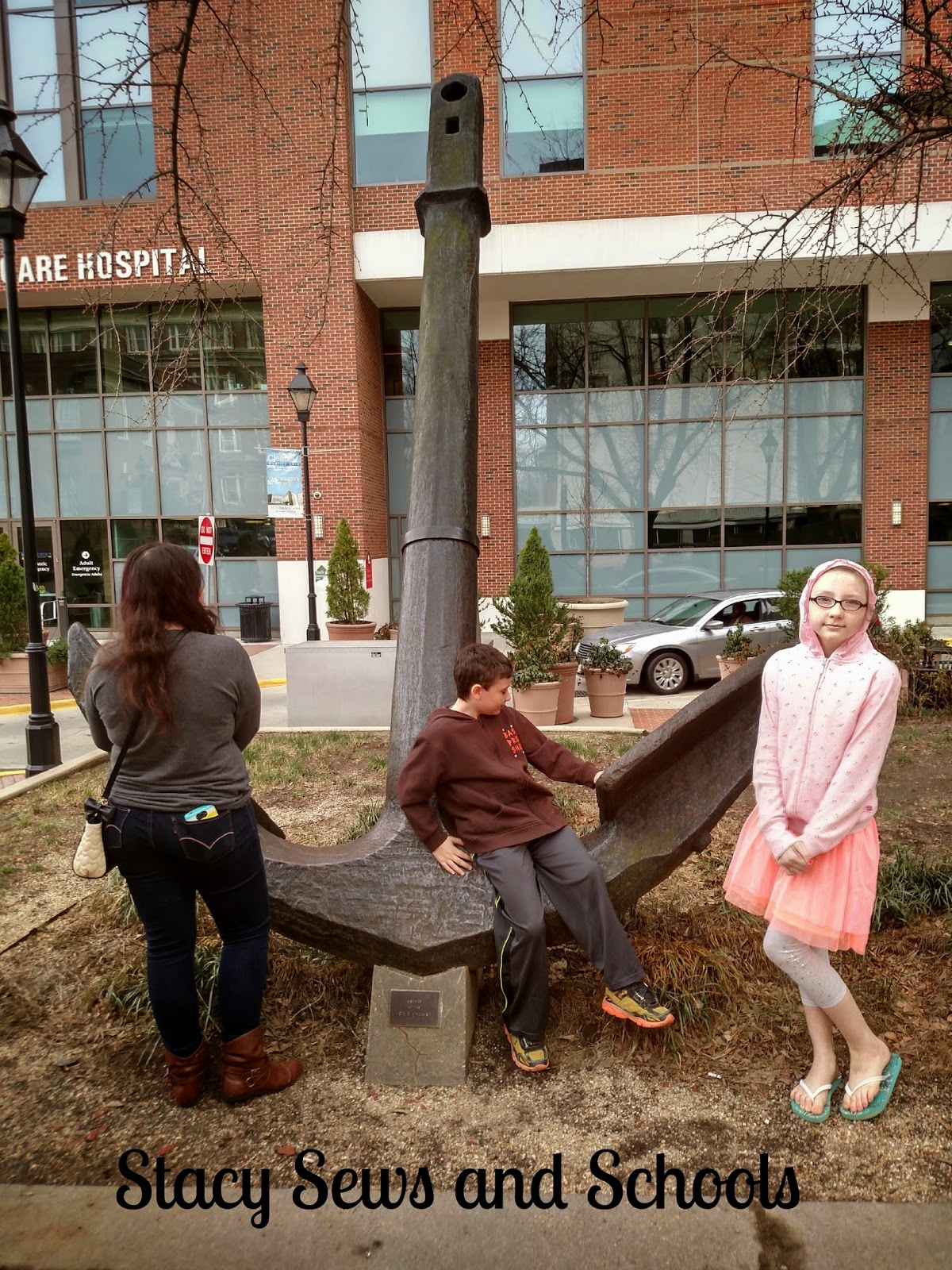 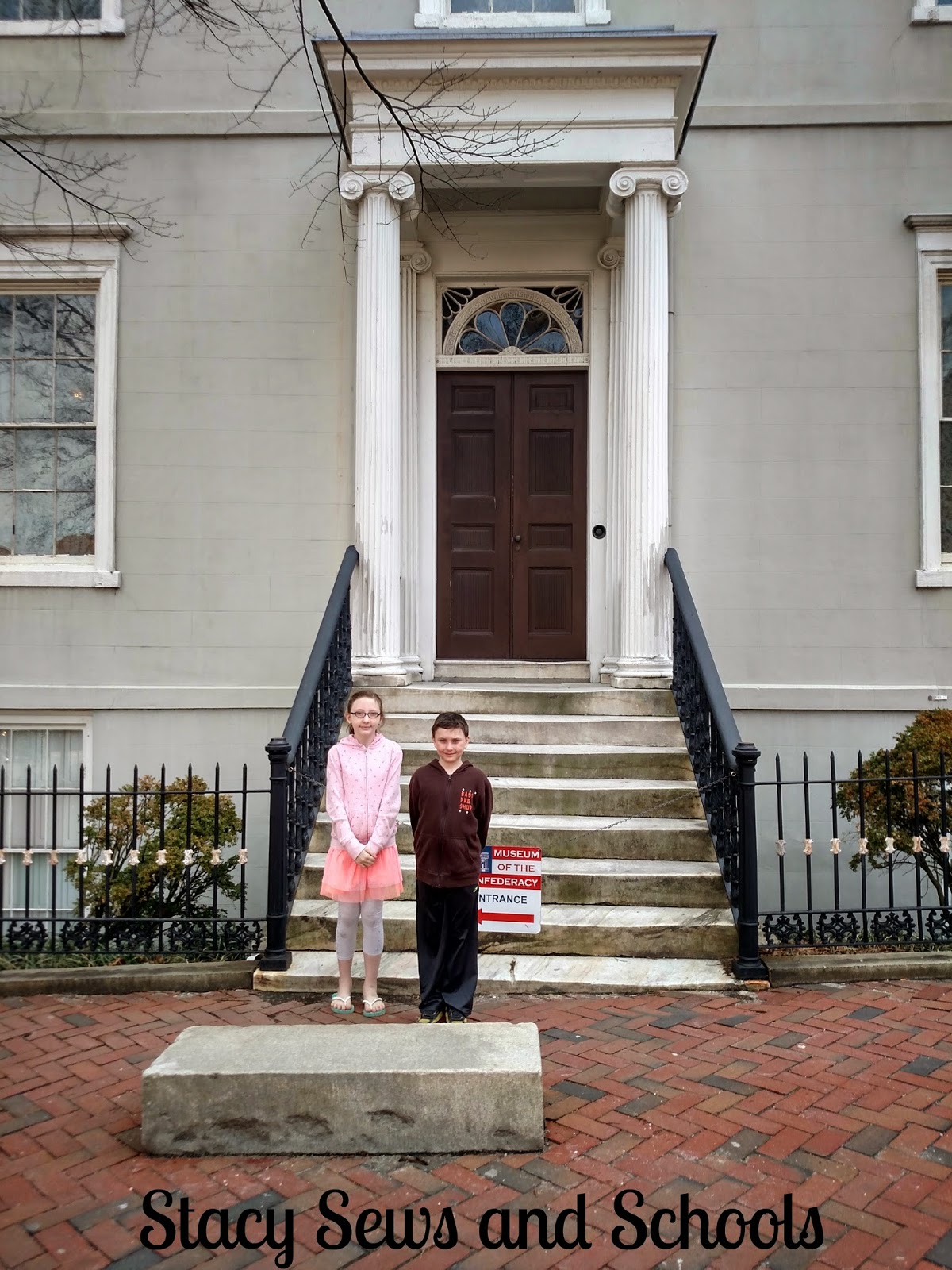 Then we hit The Museum of the Confederacy. That's when we found out that it wasn't free, only the White House of the Confederacy was. That's OK. We explored the gift shop while waiting on our tour time. And once again we just had to buy something!! I got postcards, Cailey got a paddle ball set with civil war info on it, and Colin got a harmonica.
The tour was fascinating!!! If you want to learn about an extraordinary woman, look up Varina Davis!

After that we had a fairly boring week.

My birthday came and went. I did manage to find a couple of great deals for my birthday. I went into Godiva for my monthly free piece of chocolate only to discover that I had a $10 birthday coupon! WOO HOO!!! Then I went to Yankee Candle and stocked up on $1 tarts AND I had a $5 coupon!

Then we had Colin's birthday party on the weekend. 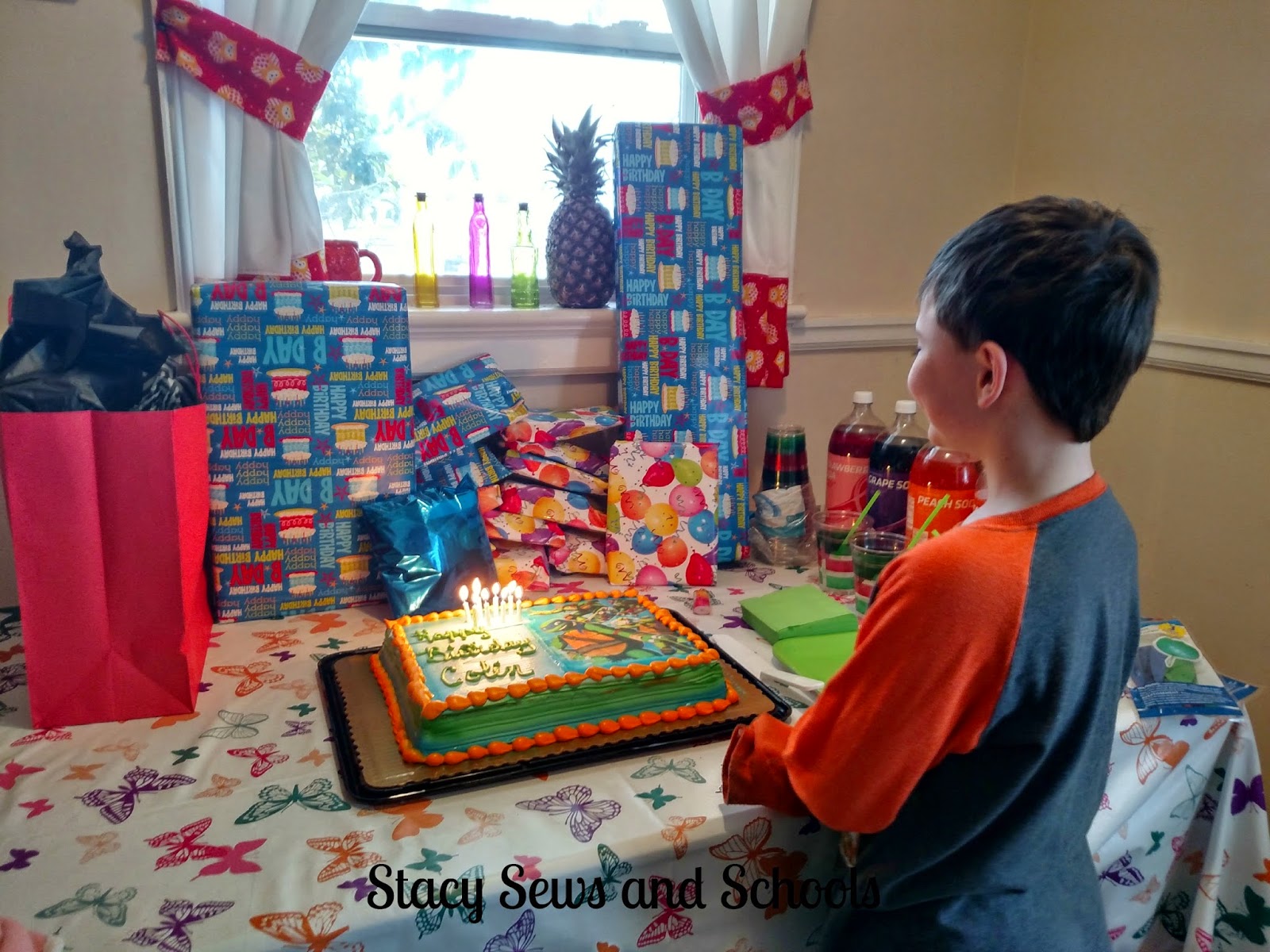 Once again we had friends over for cake, ice cream and FUN!!!!!
And that's the last fun day we've had.

Early on the morning of Colin's actual birthday, 3 am to be exact, I woke up to find him on the couch gasping for breath. A short time later we were at the ER. He had an extreme asthmatic episode, his first ever. It was the scariest time of my life. To read the full story, see last week's Use Your Words post.

Here is a picture of Colin on his actual birthday. Deanna is giving him cuddles. 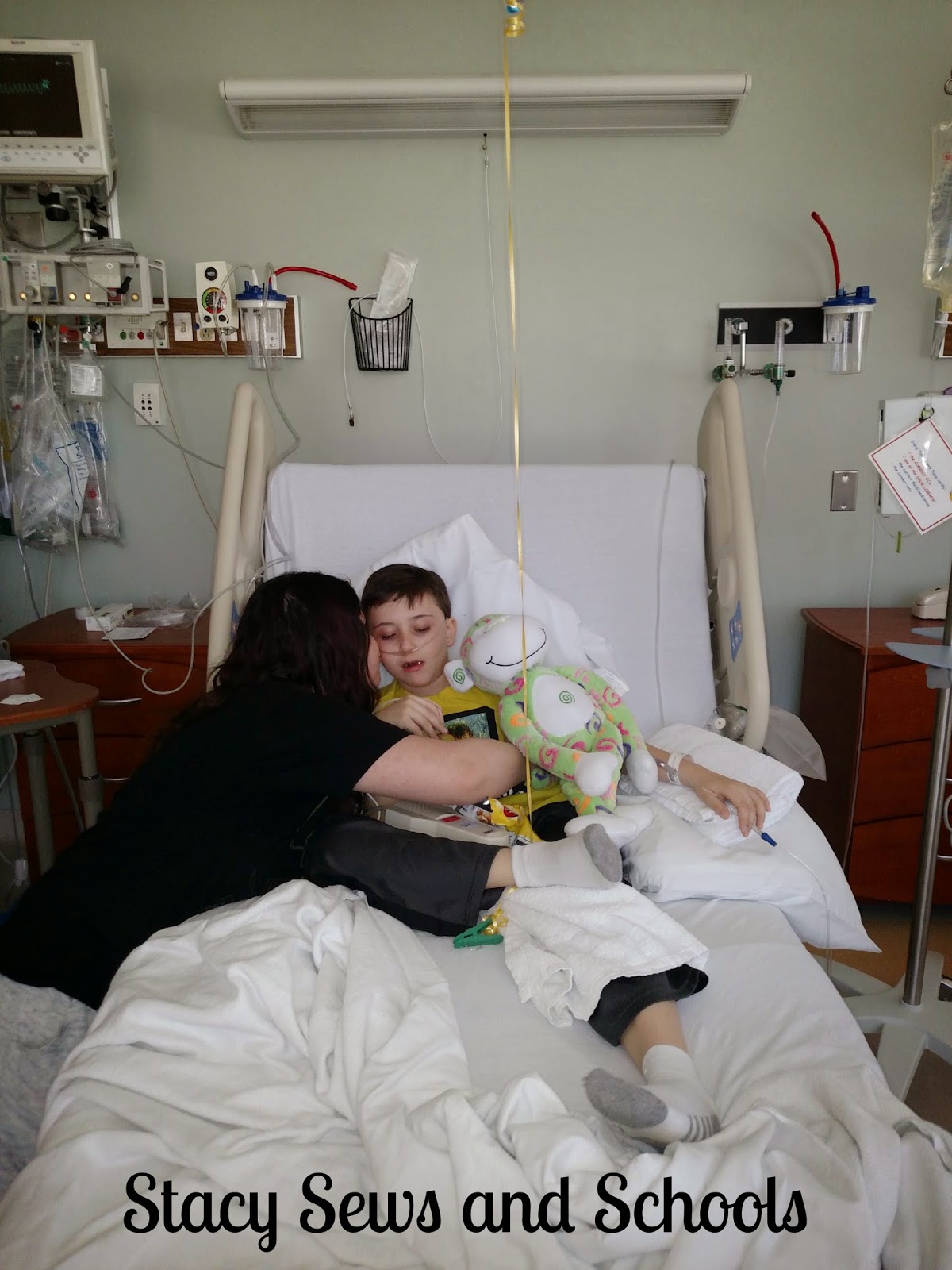 He spent that day in a regular room, it wasn't until 5am the next morning that he was rushed into PICU.

He spent a total of 6 days in the hospital, 4 of those in PICU.

He went in on his birthday and came home on Easter. 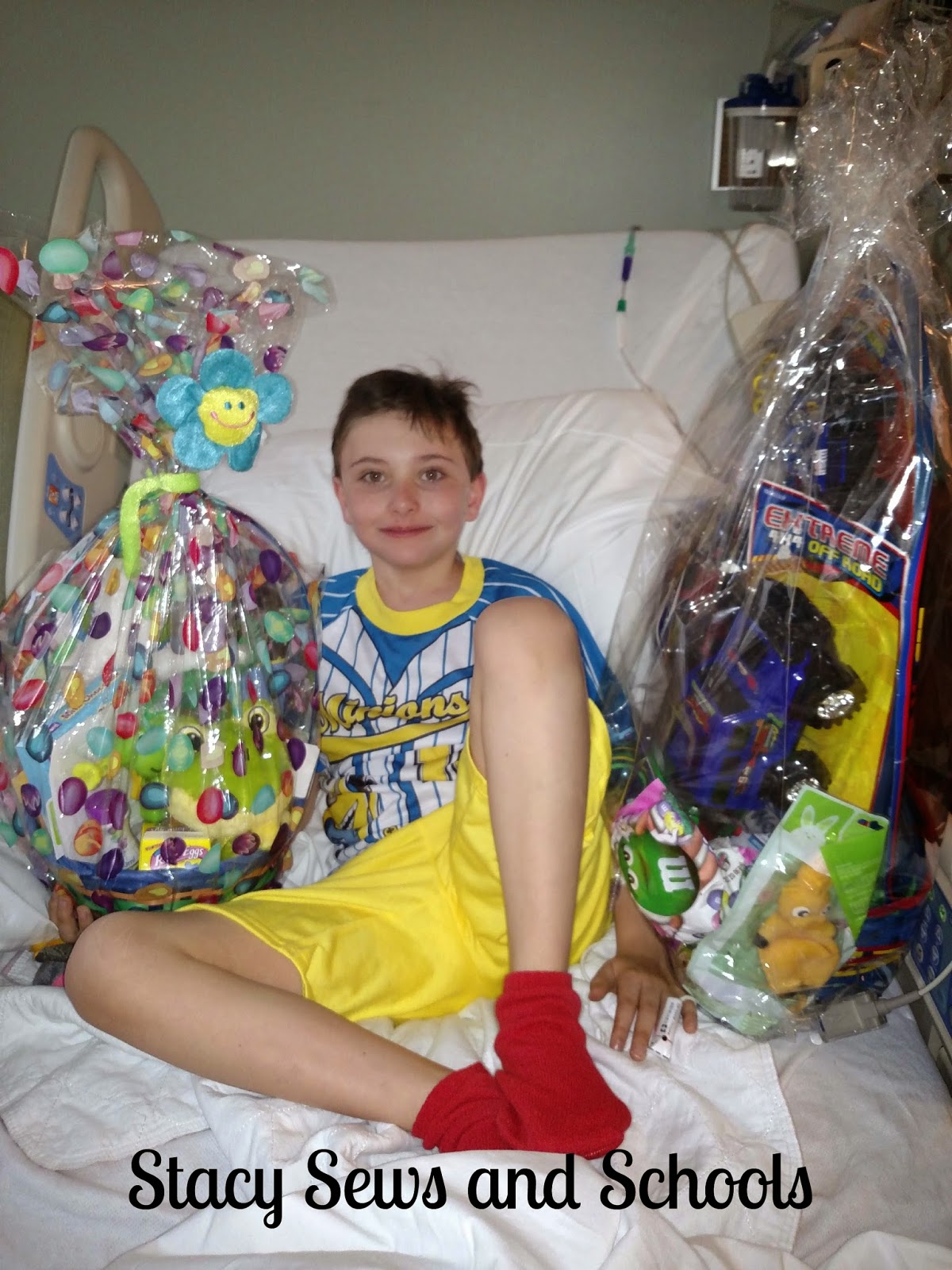 This was Easter morning. The Easter Bunny brought him 2 baskets!!!

We never got to color our eggs or make bunny butt cupcakes or rice treat chicks. Thankfully the nurses set up an Easter Egg hunt for Colin and another child that was on the pediatric floor. He found the golden egg and won a stuffed bunny.

I learned how much my older children have grown and how much they really love each other. I wouldn't have made it through those 6 days without Jacob, Joshua and Deanna. They were there for Colin, Cailey and me.

It has been a very long road.

I have been having horrible nightmares. I wish they would stop.

Colin should be on his breathing treatments as needed now but we haven't been able to move him to that yet. Right now he is getting them every 8 hours. Hoping that we can move him to every 12 before the end of the weekend. If not, it's off to the doc we go, again. 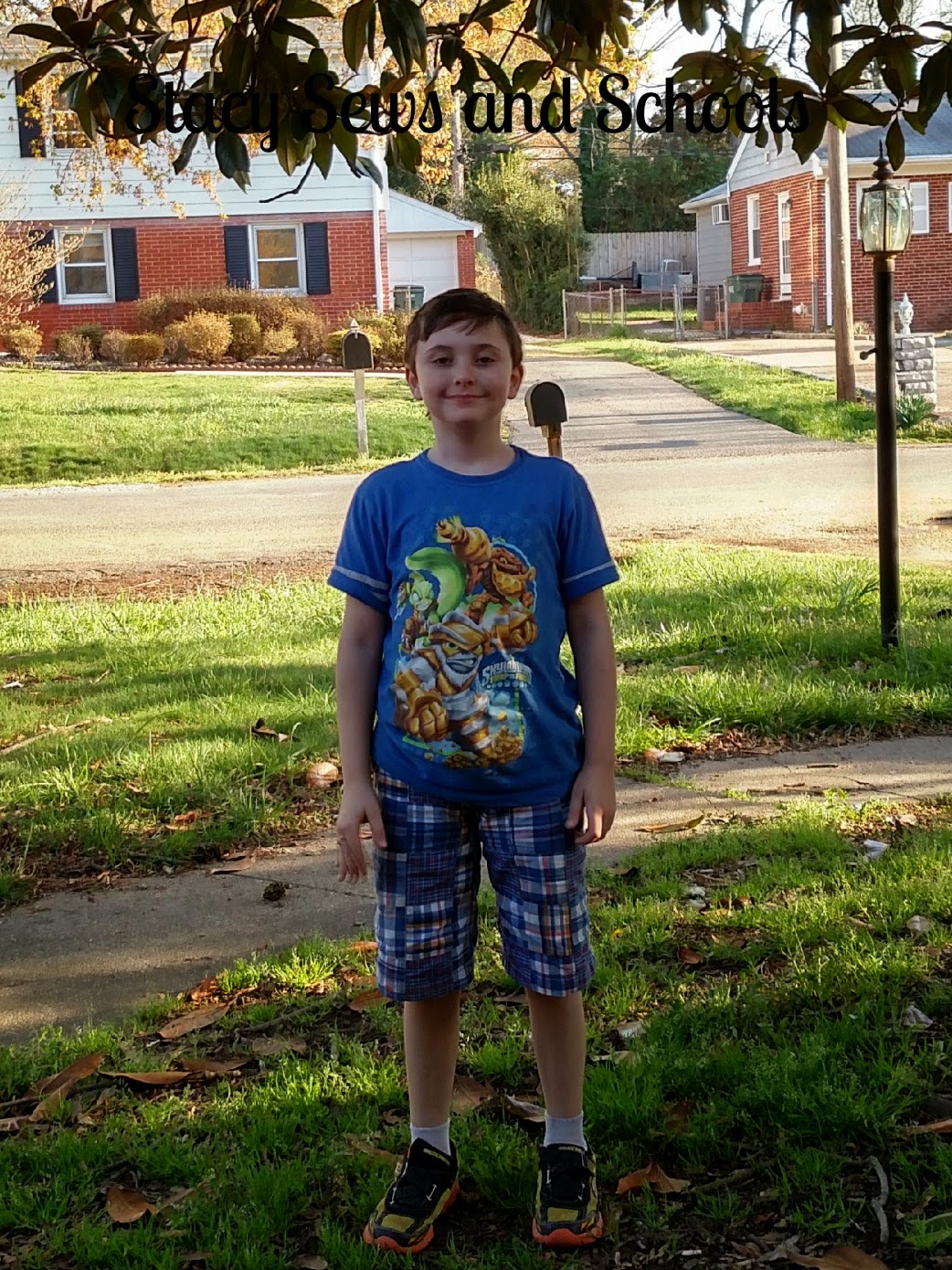 It has been sooooo hard to keep him in and his activity levels down.
This was his first time out to play since the whole thing happened.

2 things -
1-The boy loved his vest treatments (it is wrapped around his middle and filled with air, it then shakes like an off balanced washing machine during a spin cycle). He cracked up all the respiratory therapists! He would make silly noises through the whole thing! It got to where we (including the nurses) would ask him for favorites.
2- He loves sponge baths and tried to talk me into giving him them at home.

OH! And would you believe, his first night home from the hospital and Deanna wakes up at 2am puking! YILES!!!! She had a 24 hour bug.
Then I ended up with some terrible respiratory bug.
Thankfully Colin hasn't caught either of those things!! Although, I have to wonder if I didn't catch that bug from him. It was vicious and could possibly have been the culprit behind his sudden asthma attack along with the nasty allergies.

So, please, bear with me. I will be back to blogging full time soonish. Right now I am focusing all my energy into taking care of my little guy and seeing how things will be for him in the future.