Welcome to a Secret Subject Swap.

Here are links to all the sites now featuring Secret Subject Swap posts. Sit back, grab a cup, and

check them all out. See you there:

Your “Secret Subject” is: The Year Blitzen Got On Santa's Naughty List
It was submitted by: http://www.momaical.com

In all fairness, it wasn’t REALLLLLY Blitzen’s fault.... Not REALLLLLY... I mean, come on! Who is always the favorite? Rudolph. Yep, that spoiled rotten reindeer. He thinks he is just soooo cool because his nose lights up. Big deal. :P
Here’s how it all went down.
It was a normal, average day. Blitzen was flying in to work when all of a sudden a bright, red light blinds him! He was so disoriented that he flew right into Comet. Yep, it was Rudolph’s nose again. SIGH.... Down Blitzen and Comet went, crashing through one of the workshops and landing in a heap on a pile of Furbys. Don’t worry, no one was seriously hurt and those stupid Furbys would still be making it down chimneys on Christmas Eve, unfortunately....  With his pride and rump bruised, Blitzen went home to get....well.... blitzed.. Seriously, with that name, you can’t blame him.
A while later, Blitzen’s wife, Doereen, comes home to find him in a state.... Then she starts complaining; her mother never DID like him, how are they going to make up for that day’s pay, and the BIG ONE, why can’t he be more like Rudolph????? That was IT! He had had enough! And that is when The Plan began to form.
The Plan, just thinking about it made Blitzen snort with laughter! He would get even with that Goody Red-Nose!
So, he grabbed up the fruitcake that had been sitting on the counter for who knows HOW long and he added a special ingredient... Ex-lax. Then he wrapped it all up with a pretty bow and set off to find Rudolph, that stinking red-nosed pain in the......

Have you ever seen what happens to a FLYING reindeer when they get the runs.... Well, let me assure you, it ain’t pretty.... Pigeons and seagulls have NOTHING on them.
And have you ever seen what reindeer.... um..... pooh can do to a red suit?? Well, Santa found out. And being Santa, he knew exactly the who and the why.

And THAT is how Blitzen got on Santa’s Naughty List...... 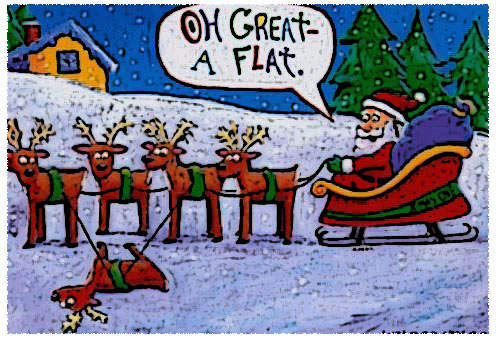 Now, don't forget to go check out the rest of swappers!!!

Posted by stacy sews and schools at 5:00 AM

Email ThisBlogThis!Share to TwitterShare to FacebookShare to Pinterest
Labels: Craziness